We’ve all seen laser pointers, heard of surgeries that use lasers and may have even witnessed a laser light show, but we may not associate these beams of light with the workplace. Lasers have many applications in workplaces that span many industries, though. Lasers are used in audio, video and computer equipment, bar code readers, printers and fax machines, fiber optic systems, research laboratories, dental and medical procedures and plenty of other applications, according to the FDA. In industrial work settings, they’re typically used for cutting and welding or in laser-guided tools.

These lasers may all sound very different, which may lead you to wonder exactly what a laser is. Let’s take a closer look.

What Is a Laser?

The word laser is actually an acronym that stands for “light amplification by the stimulated emission of radiation.” On a basic level, lasers are intense beams of light focused narrowly in one direction.

In the diagram below from the FDA, you can see that a simple laser has a tube with mirrors on both ends that reflect—and amplify—the laser medium to create a beam. This medium, which can be a solid, liquid or gas depending on the type of laser, releases energy that creates light particles (which can be visible light, ultraviolet light or infrared radiation). Depending on the type of medium, the laser beam will be a specific color and wavelength.

Not all lasers are the same, though, so it’s important to understand the four laser hazard classes and which ones can actually cause harm.

What Can a Workplace Do to Prevent Laser Injuries?

Class IIIb and IV lasers are the most dangerous and they’re also commonly used in industrial workplaces. Facilities that use these types of lasers need to take extra precautions to prevent laser-related injuries.

The first thing a workplace should do is make sure it’s compliant with safety regulations. OSHA standard CFR 1926.102(b)(2) applies to the construction industry and states:

Employees whose occupation or assignment requires exposure to laser beams shall be furnished suitable laser safety goggles which will protect for the specific wavelength of the laser and be of optical density (O.D.) adequate for the energy involved.

(Note: “Optical density” refers to the protection needed for the intensity of a given laser. Guidelines for selecting appropriate eyewear are included in the OSHA standard. Not all eyewear will protect against all laser wavelengths.)

Even non-construction workplaces should consider following the above standard, though, even if federal OSHA does not technically require it. OSHA’s standards for personal protective equipment (PPE) should also be consulted.

In addition to OSHA standards, the ANSI standard for laser safety (ANSI Z136.1) is recognized as an industry standard. It calls on workplaces to designate a Laser Safety Officer if workers use Class IIIb and IV lasers. This person is responsible for evaluating laser hazards, implementing control measures, ensuring operating procedures are followed, seeking appropriate PPE and generally making sure laser safety in the workplace is comprehensive and understood.

If your state has a state-run OSHA, make sure to comply with any local regulations, too, as some states have more specific laser standards.

Just as exposure limits exist for hazardous chemicals, exposure limits also exist for lasers. To keep employees from being exposed to too much laser energy, engineering and administrative controls should be put in place.

Once you have exhausted engineering controls, use administrative controls such as developing appropriate procedures for using lasers, conducting training and using safety signs and labels to warn anyone in the area about laser hazards. 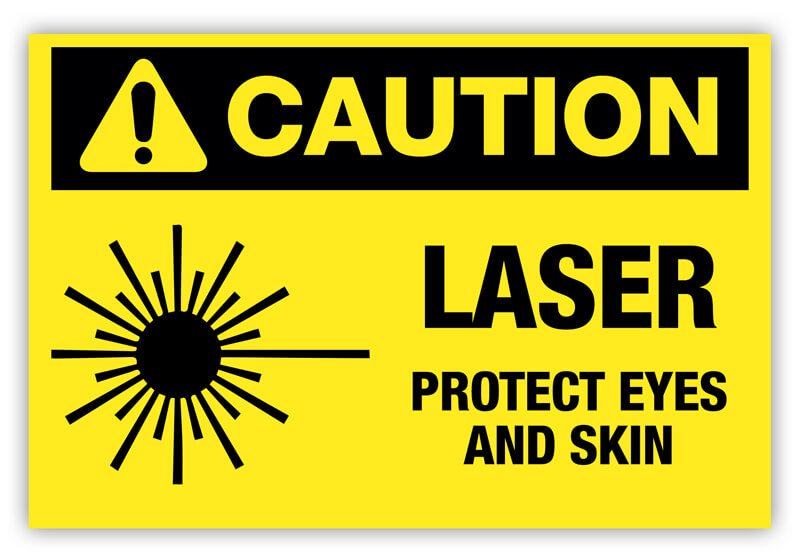 Signs can also remind workers about wearing appropriate PPE and tell them whether or not they are allowed in certain areas near lasers.

Lasers may not look dangerous, but many types of lasers can cause lasting eye damage. Simple controls can be used to prevent accidents, and PPE such as protective eyewear should be worn for added protection.

Additional hazards—not just eye hazards—exist around lasers, too, so laser safety officers and safety managers should pay attention to chemical hazards (for lasers that use chemicals), explosion hazards (when using laser welding equipment), electrical hazards, fire hazards and the potential for skin injuries.