Deadly illnesses such as Ebola have been on people’s minds in recent months. Many have questions about the threat of the disease and whether it could impact communities and workplaces in the United States. This is understandable, but these concerns often overshadow the more likely culprits of illness and time spent away from work this winter: the flu and the common cold.

You may assume everyone at your workplace knows how to prevent the spread of illnesses such as colds and the flu. You’re all adults, after all, and adults know how to keep their germs to themselves, right?

As it turns out, while people may have a general idea of what they should do to prevent the spread of illness, they often don’t know enough of the details or they disregard instructions. For example, a 2013 study by researchers at Michigan State University found that 95 percent of people wash their hands incorrectly. You read that right; only five percent of people wash their hands with soap and water long enough to kill viruses and bacteria. That means the majority of people touch surfaces like doors, keyboards, microwaves and other common items in the workplace and leave behind germs that could potentially make others sick.

Another study, this one out of the University of Arizona, found that one worker who comes in sick with an easily transmittable illness can contaminate 40 to 60 percent of commonly touched surfaces in the workplace within two hours. That’s pretty alarming, especially if your business employs a small number of people; just one sick person could quickly put your workforce out of commission.

So what can employers do to prevent the spread of illnesses at work? First, they should understand how common infections spread and then take some basic steps—including making small alterations to the workplace and educating employees—to keep those infections from infiltrating your business.

Typically, illnesses like the flu are spread when infected people talk, cough or sneeze and particles become suspended in the air or land on others.

If a sick person touches surfaces after sneezing or blowing his or her nose, other people can also pick up these droplets.

Diseases like Ebola are transmitted by direct contact with the bodily fluids of an infected person, which can occur by directly touching the sick person or a surface that has been contaminated with bodily fluids.

Stopping the Spread of Illness

In the workplace, most illnesses will be spread through coughing, sneezing and touching common surfaces. There are a few main ways you can reduce these occurrences.

The best way to keep illnesses from spreading is to keep contagious people out of the workplace. Many people come to work when they’re sick. Some feel they can’t take time off because they’re too busy, and others fear losing their jobs if they don’t come in. Having a sick leave policy that takes illnesses seriously can encourage people to stay home. Tell employees if they have symptoms of the flu, you don’t want to see them at work.

Oftentimes, when sick people come to work they don’t get as much work done anyway because they aren’t feeling well. It’s better for everyone if they recover off the job. 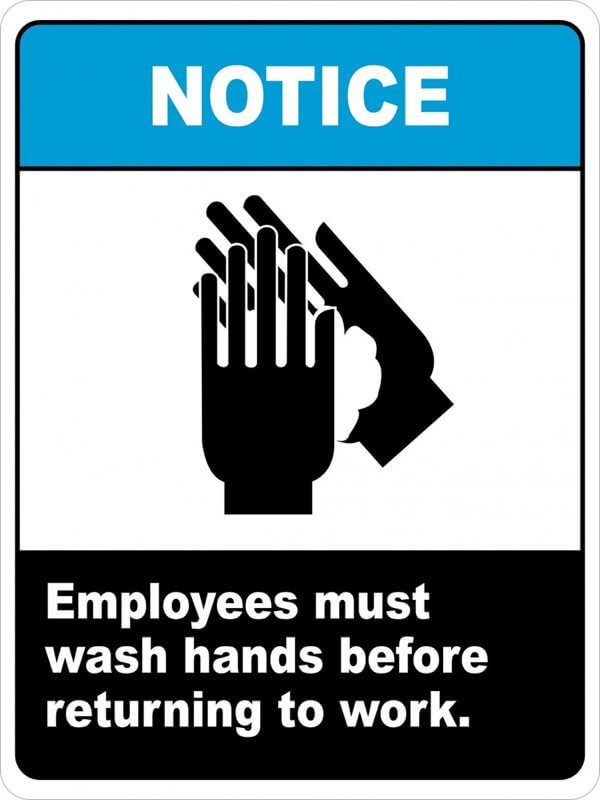 Let’s return to that study about how almost everyone is washing his or her hands wrong. What exactly should people be doing? OSHA recommends scrubbing your hands with soap and water for at least 20 seconds, making sure to clean between fingers and under fingernails. (In the Michigan State study, average hand-washing time was six seconds.) Then dry your hands completely with a hand dryer or paper towel.

Policing workers’ hand washing technique isn’t really practical, but you can post signs reminding employees to wash their hands and how to do so. (The study found doing this to be a fairly effective way to increase hand washing.)

You can also remind people to sneeze or cough into a tissue whenever possible. When that’s not possible, they should use their elbow—not their hands—to cover their nose and mouth. Workplaces can place extra boxes of tissues around the office or work floor during cold and flu season to encourage people to use them.

Finally, point out that touching others can easily transmit germs, so people should avoid handshakes during outbreaks of an illness and avoid using other people’s equipment such as keyboards or PPE. Your workplace could even try to cut down on unnecessary meetings where germs could spread.

You may not be able to get everyone to comply with personal hygiene guidelines, but you can take some additional steps to keep the workplace as clean and germ-free as possible.

First, think about all those surfaces people touch multiple times per day: door handles, vending machines, the buttons on the microwave, elevator buttons. When was the last time you cleaned some of those things? Ideally, you’ll be cleaning them daily during cold and flu season.

You can also make sure that people need to touch as few things as possible. For example, switching to trashcans that can be opened with a pedal on the floor or that don’t need to be opened at all can prevent the need to touch a lid. Having a trashcan next to the door in the bathroom so people can use a paper towel to touch the handle and then easily throw it away is also helpful.

It’s also a good idea to have cleaning wipes or sprays available for employees to use at their workstations to clean things like keyboards, desks, control panels and steering wheels. These things get touched many times each day, but they don’t usually get cleaned often enough.

Placing hand sanitizers throughout your workplace can also allow people to clean their hands without making extra trips to the bathroom, which can minimize the amount of bacteria that moves from surface to surface.

If you and your employees become comfortable with these cleanliness practices and make hygiene a part of the workplace routine, you’ll also be better prepared if an outbreak of a less common illness does occur.

It’s Not Just the Flu

Many of us trivialize illnesses like a cold or the flu, but common illnesses take a significant toll on American workplaces. According to Flu.gov, nearly 111 million workdays are lost each flu season, which amounts to $7 billion in lost productivity and sick days.

While you may feel that reminding employees about simple things like hand washing and using a tissue are silly, these simple steps can go a long way to reducing the number of illnesses that occur. If you don’t think employees will take you seriously, have them watch this video showing how quickly bacteria can spread through the workplace.

Lastly, if an illness can be prevented with a vaccine such as a flu shot, encourage your workers to get it. You could host a vaccination day at your worksite, partner with a local health organization or provide information about local vaccination resources. Learn more about vaccines at Flu.gov.

To make hand washing training even easier, you can opt for training DVDs.